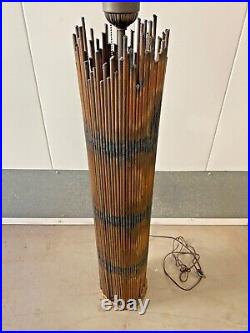 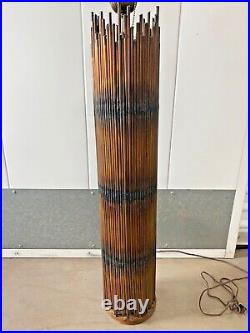 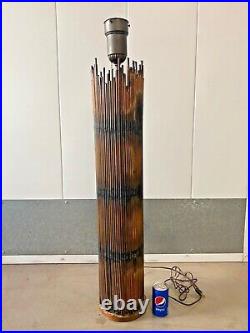 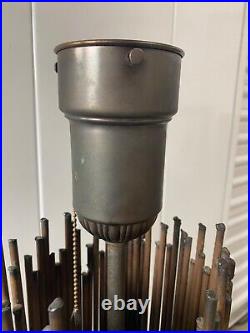 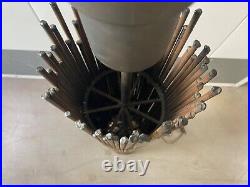 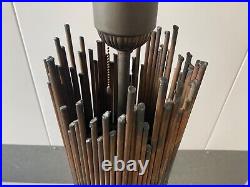 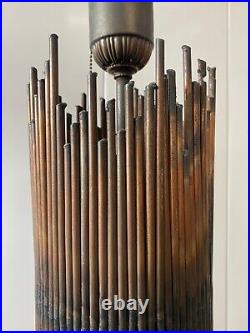 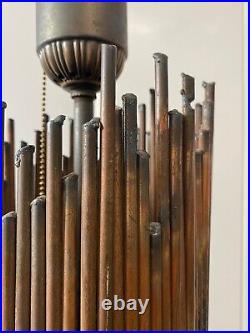 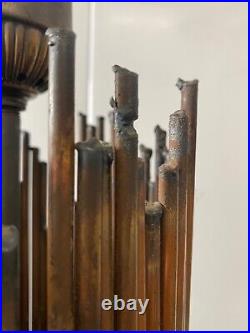 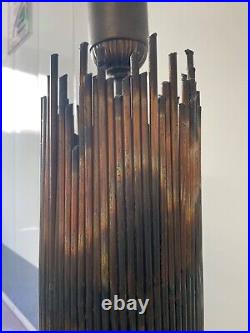 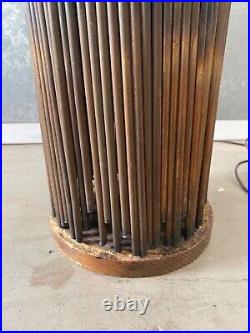 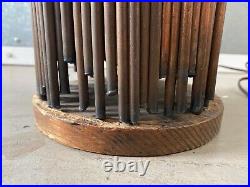 This is a bold and skillfully crafted Amazing Antique Vintage Mid Century Modern BRUTALIST Copper Metal Lamp, comprised of rugged rows of copper rods which have been welded into a cylinder-like form to create this large avant garde Brutalist lamp. The overall shape resembles a futuristic Soviet Bloc skyscraper, and starkly stands out from a distance. This piece approximately dates to the 1960’s – 1970’s and appears to be unmarked and unsigned. Perhaps you recognize the artist or designer of this piece? Approximately 19 1/2 inches tall x 7 inches wide. This artwork appears to be a functional lamp; however, it has not been plugged in. Very good condition for age, with some dustiness and a natural tarnished patina to the copper lamp body from age please see photos. Acquired from an old and modern estate in Studio City, California. If you like what you see, I encourage you to make an Offer. Please check out my other listings for more wonderful and unique artworks! Which derives from the French word. Meaning “raw” – was coined to describe an architectural style that emerged in the 1950s featuring monumental buildings, usually made of unornamented concrete, whose design was meant to project an air of strength and solidity. Essentially created the brutalist style; its best-known iterations in the United States are the Marcel Breuer-designed Whitney Museum of American Art and Paul Rudolph’s Yale Art and Architecture Building. Lately, the word “brutalist” has been adopted by the realms of furniture design and the decorative arts to refer to cabinet’s, tables and accessory pieces such as mirror frames and lighting that are made of rougher, deeply textured metals and other. Materials that are the visual and palpable antithesis of the sleek, smooth and suave. Brutalist design encompasses that which is crafted, hewn and worked by hand – an aesthetic rebuke (or, at least, a counterpoint) to furniture that is created using 21st-century materials and technology. Paul Evans is Exhibit A. His Sculpture Front cabinets laced with high-relief patinated steel mounts have become collector’s items nonpareil, while the chairs and tables in his later Cityscape series and Sculpted Bronze series. Are perhaps the most expressive, attention-grabbing pieces in modern American design. Other exemplars of brutalist design are Silas Seandel. The idiosyncratic New York furniture designer and sculptor whose works in metal – in particular his tables. Have a kind of brawny lyricism, and Curtis Jere. A nom-de-trade for the California team of Curtis Freiler and Jerry Fels. The bold makers of expressive scorched and sheared copper and brass mirror frames and wall-mounted sculptures. The names of other brutalist designers are, so far, unknown to history. When it comes to attitude and commanding presence, brutalist design has it in spades. Its primary gestation began in the 50’s from the architectural movement known as New Brutalism, which evolved from the use of concrete as a building material to create monumental statements adapted from modernist ideals. Raw concrete in French is. Which was a source of the name. Its use in architecture and sculpture added a confrontational rawness to it, which influenced the evolution and style of brutalist movement in the 60’s and 70’s. Brutalist art drew inspiration from the likes of Le Corbusier’s architecture to the sculptures by Alexander Archipenko, Constantin Brancusi and Alberto Giacometti. With sculpture, conflicting asymmetrical geometries merged with mayhem and menace, usually constructed from raw forms of metal and clay, to essentially define the brutalist aesthetic. It went on a tangent to the Mid Century modernism where you had artists like Paul Evans creating audacious, brash, heavily textured furniture with pure abandon. Brutalist architecture was quite often represented with repetitive angular geometries to a massive scale. It also was reactionary in the sense that the early Brutalism architects found the streamlined modernist designs too symmetrical and neat and wanted to introduce more abstract and unpredictable shapes to their brutalist buildings. The radical brutalist art had an element of risk to it and pushed the boundaries of abstract expressionism in modernist art. Rather than being easy on the eye it is more antagonistic and even hostile, and a challenge for interior designers to integrate into any location. But for giving life into an inert environment, a brutalist piece is synonymous with edgy dynamics and primal honesty. This item is in the category “Art\Art Sculptures”. The seller is “willsusa_utzeqm” and is located in this country: US. This item can be shipped to United States, Canada.